Rabbi Patz and Naomi visited our young members at URJ Crane Lake Camp on Sunday, July 21st.
In the photograph are Angie Ortega, Coral Beauchamp, Yanelis Beauchamp and Shlomo Garcia along with Rabbi Patz, Naomi Patz and their camper-granddaughters Sadie and Dahlia Reynolds. 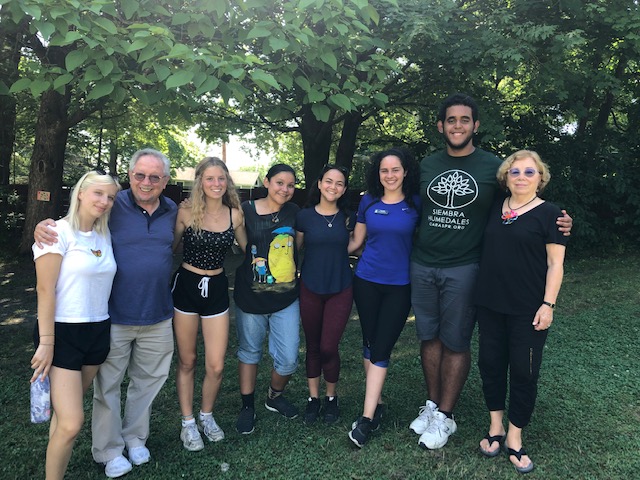 We have a very exciting announcement to make:

After more than a year of planning, our solar-powered electricity generation and storage system is now live! The installation of this system, which will not only help us reduce our electricity costs, but will also be of invaluable use after the next grid-collapsing storm, was only possible thanks to the generous support of the following institutions and foundations:

Special thanks go to:

And finally, thank you to the amazing people who designed and installed the actual system:

Had it not been for all of their efforts, we would not have been able to proceed with this project. Words cannot express the enormous gratitude we have for their faith and trust in our ability to pull this project through. 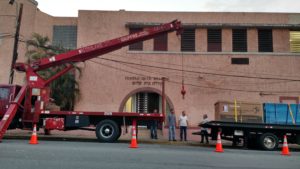 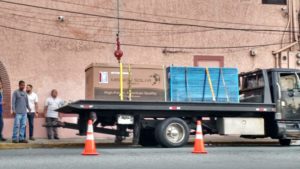 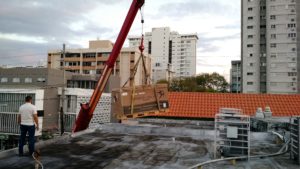 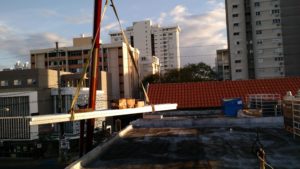 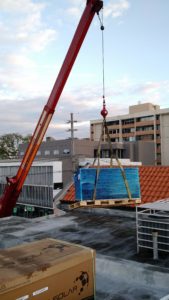 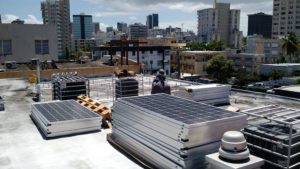 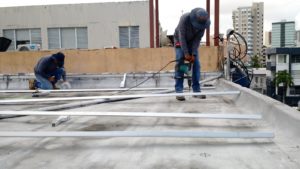 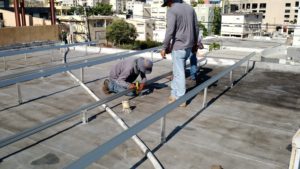 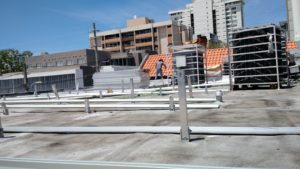 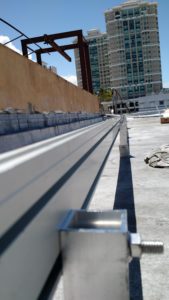 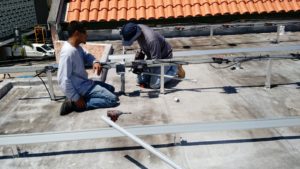 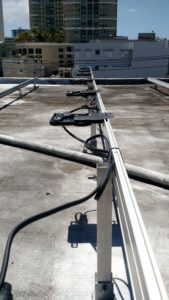 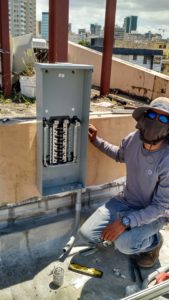 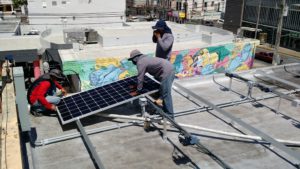 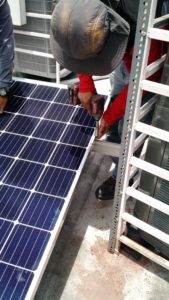 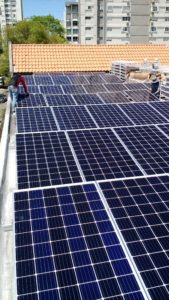 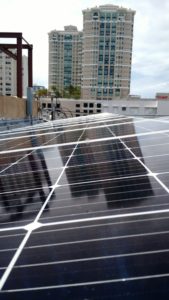 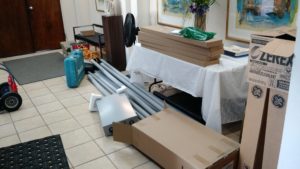 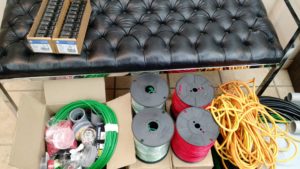 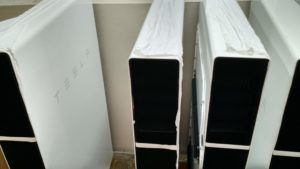 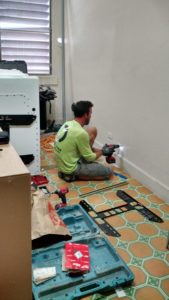 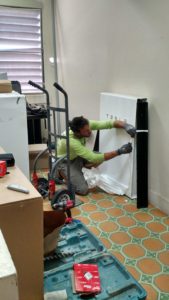 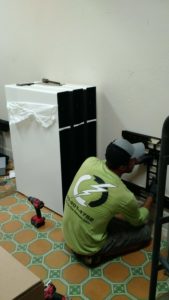 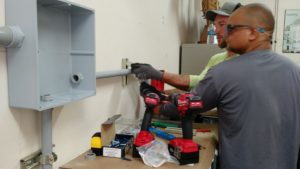 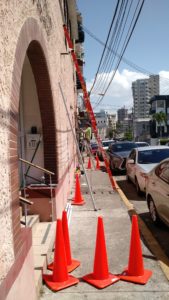 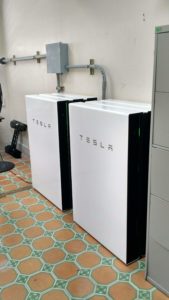 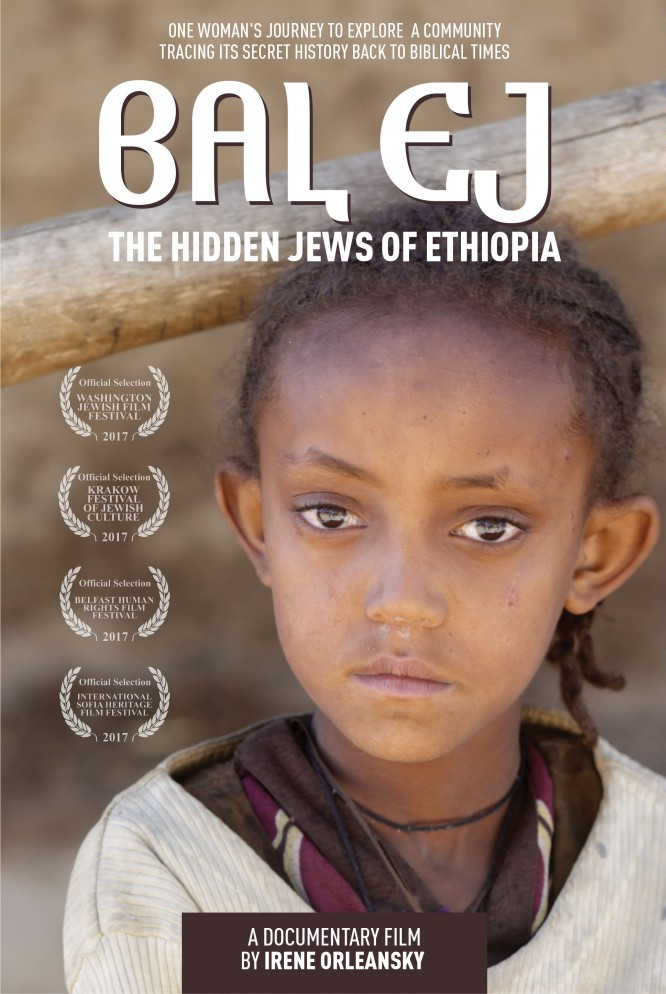 Join us on Saturday, April 6, at 6:00 PM for an evening of film and pizza! We will be screening Bal Ej: The Hidden Jews of Ethiopia.

Following this screening we will have a Q&A with the filmmaker in Israel via Skype.

Following a hundred year old account of the prominent Jewish Polish scholar Jacque Faitlovich, the film-maker travels to discover and explore a sect of secret Jews in Ethiopia. Named Bal Ej, craftsmen, for their artisan skills, they have been persecuted by their Orthodox Christian neighbors who slandered them as evil-eyed and hyena-people and have been deprived of the basic rights such as ownership of land, the reason for adopting crafts such as pottery, weaving and iron smithery. Fearing persecutions, they appear Christians outwardly, and practice Judaism in strict secrecy. The synagogues are hidden deep in the mountains and had never before been visited by strangers. Some of their ancient traditions trace back to biblical times and have been completely forgotten by the rest of the world.The film “Bal Ej: the Hidden Jews of Ethiopia” lifts the curtains of hundreds of years and reveals the history, customs and culture of this remarkable community to the world.

About the film director:

Born in Ukraine in a family of holocaust survivors from Poland and grown up in Russia, Irene Orleansky is an Israeli musician, producer, ethnographer and film maker.  Irene dedicated the last few years to exploring culture, music and traditions of remote Jewish communities in Asia and Africa.

“Senbet Leyunat” – a song from the soundtrack of the film “Bal Ej: the hidden Jews of Ethiopia”

There will also be entertainment for the children. 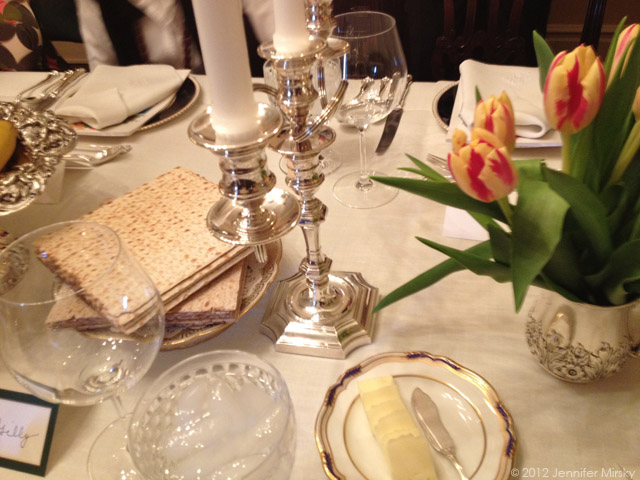 You are cordially invited to join us for the first night of Passover! Come celebrate with us and enjoy a family-style Seder led by Cantor Dorothy Goldberg at Temple Beth Shalom.

Due to limited space, we are prioritizing members, associate visitors, their spouses and children only. Non-Members who wish to attend must be Jewish.

Spaces are limited so please make your reservation promptly.

We accept checks, cash, and VISA, Master Card and Discover.

An evening with Eva Schloss 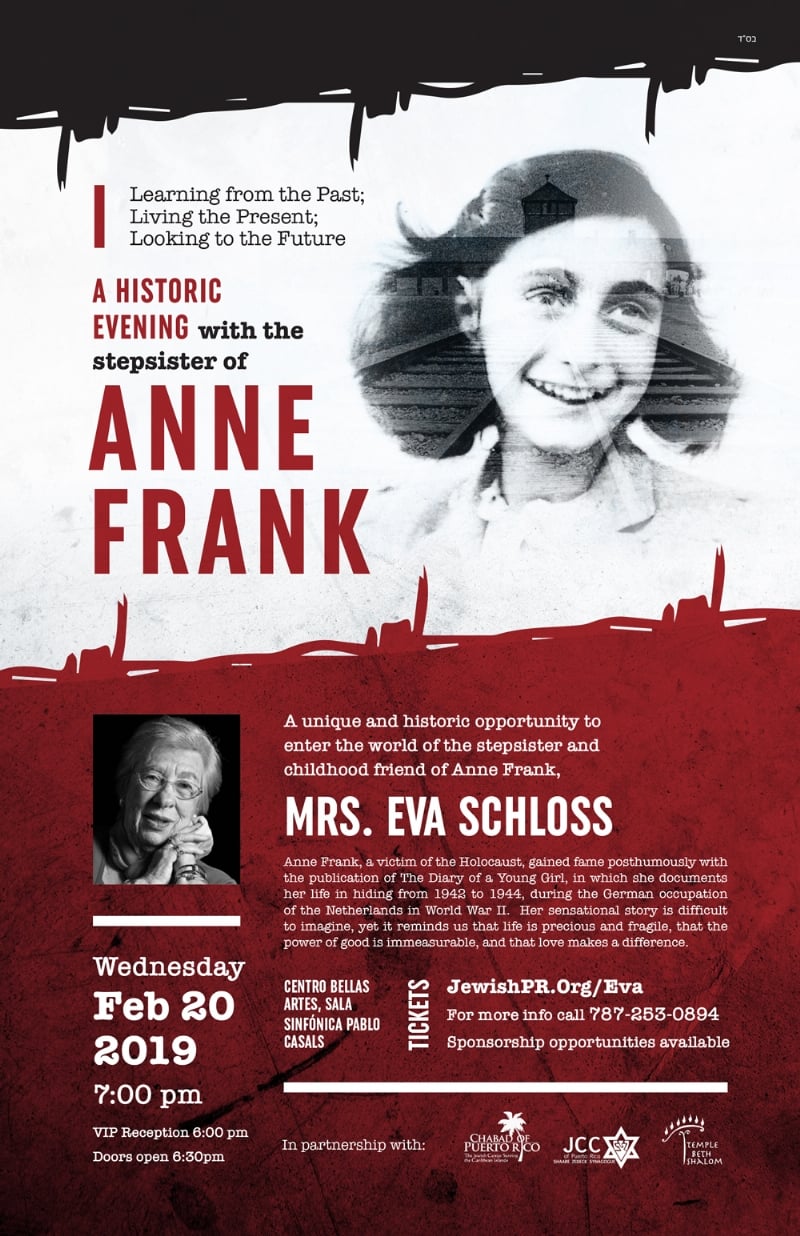 In commemoration of the 80th anniversary of Kristallnacht, Puerto Rico has an exclusive opportunity to the memorable story of Eva Schloss, stepsister and childhood friend of Anne Frank.

Eva Schloss will be traveling from London to share her story of triumph and survival with the Puerto Rio community.

Like her stepsister, Eva went into hiding in Holland until she, along with her family, was betrayed, captured, and sent to the Auschwitz-Birkenau death camp. Listen to her first hand account of the life of Anne Frank and the discovery and printing of her famed diary. Mrs. Schloss serves as trustee of the Anne Frank Educational Trust, has published three books about her experience in the holocaust and is the subject of James Still’s Play “And Then They Came For Me – Remembering The World of Anne Frank.”

The Jewish community of Puerto Rico is thrilled and excited to share Eva and her story with Puerto Rico.

On Thursday, September 20th, Rabbi Patz was one of the clergy invited to speak at the Ecumenical ceremony convened by the Puerto Rican Secretary of State to memorialize the one year anniversary of Hurricane Maria. The event included addresses by Governor Ricardo Rossello and Jeniffer Gonzáles -Colón, PR’s Resident Commissioner in Washington, D.C. The Secretary of Housing and Urban Development, Dr. Ben Carson, and Governor Rick Scott of Florida were among the honored guests at the emotional ceremony which took place at Castillo San Cristobal.

Rabbi Patz was the first of the members of the clergy to speak.

You can see the entire video below. Rabbi Patz’s message starts at the 22:45 minute mark. You can read his remarks following the video.

This has been a hard year for Puerto Rico. We suffered an attack that came in three waves:

First, Hurricane Irma and the resulting ambivalence about the ferocity of the approaching Maria. Then the hurricane itself, a terrifying night
and day for us all. And then the worst part, the painful aftermath and the slow start of relief efforts.

A member of my congregation who was off-island during the storm wrote: “My torn heart, my heavy soul, my mind is on my island. Puerto Rico of my life, your branches will bloom again. Your sky has never stopped being blue. Your people have never stopped being giants.”

Hurricane Maria dealt a heavy blow to an island already crippled by an overloaded and fragile infrastructure and the damages of Hurricane Irma. Yet, despite the challenge, unprecedented in scope, spontaneous relief efforts began instantly. Residents started gathering debris, removing trees that blocked roads, all by themselves. Restaurants opened, with severely limited menus – cash only, of course. One restaurant offered a huge cookie with a swirling hurricane design on it.

At the initiative of its musical director, Maximiano Valdes (whose wife is an active board member of our congregation), the symphony orchestra,
whose building was too damaged to be used, took itself on tour, playing 22 concerts in devastated small towns across Puerto Rico, giving a tremendous morale boost to these heavily impacted, isolated communities. It was an extraordinary, validating experience for the members of the
orchestra as well.

In defiance of the destruction and the astounding flooding, Puerto Rican flags began to appear everywhere, many with the words Puerto Rico se  levanta! attached to them. The spirit that prevailed everywhere was straight-out resilience. Puerto Rico se levanta a pesar de todos los  obstáculos.

The tiny Jewish community on the island, with the help of the Jewish Federations of North America and IsraAID, the Israeli humanitarian aid
agency, launched relief efforts immediately. Temple Beth Shalom’s people had been sending emergency supplies to St. Thomas after Irma. Now,
members – even though they themselves were without power or water – distributed generators and 300 water purification kits to families in
isolated mountain locations, along with instructions in how to use them.

Even last month, our members were in Utuado, one of the hardest hit communities, working on water purification.

The efforts of the members of Puerto Rico’s Jewish community symbolize the can-do spirit of resilience – resistencia – that pervades the
island. The mood is vamonos! That spirit was best expressed in a sign my wife and I saw on a restaurant’s chalkboard on Ashford two days after
Maria:

We are weaker, but we are stronger too! We acknowledge our frustrations and the pain and loss and fear that still linger, but we also seek to
recover our gratitude to God by acting with kindness and generosity to all in our beloved Puerto Rico.

Somos más débiles, y tambíen somos más fuertes! We have learned how to survive and we will make it, with God’s help – con la ayuda de Dios.

Update on our situation after Hurricane Maria

Due to the damage caused by hurricane Maria, our telephone line is still not in service. You may contact us via email, but please understand that we have gotten so many messages of support in the last few months (thank you!) that it has been difficult to catch up, and it may take some time to respond.
The pace of recovery has been frustratingly slow. The roads are extremely deteriorated and only some traffic lights have power, so driving around is still quite hazardous. In many places outside the San Juan metro area the situation is still dire, with entire communities continuing without electricity or access to drinking water, and many roads destroyed by landslides. The collapsed infrastructure seriously impacted the already recession-weakened economy. Many people have still not been able to return to work, and many small and mid-sized businesses have been forced to shut their doors indefinitely. Over 100,000 people have fled the island.
Many members of our congregation are still without power and some of us are also still without running water. We have been adjusting to the possibility that this very uncomfortable reality may just be the “new normal.”
It has been difficult to keep our website updated, but things are improving somewhat. Leaves have grown back on the trees that remained standing, which had been stripped bare. The power is back in many areas. We have had power and water back at the Temple since mid-November, and we are holding regular services. Our Rabbi returned in mid-December, which means that our congregation has had more direct support for the spiritual aspect of this crisis as well.
Because the immediate emergency has passed, and because we have been fortunate in getting donations of generators and water filters and even money for the most distressed cases from the JFNA, the URJ, and individual families and congregations, the immediate emergency needs of water, food, medicine, etc. of the members of our congregation have abated.
We continue to receive support from people such as yourself, and we continue to extend that support to other communities that are still in need whenever we receive goods we know are still needed. Thanks to some very generous donors, we were able to distribute over 250 water purifiers to families in San Juan, Canóvanas, Las Marías, Añasco, Cayey, Utuado, and Comerío.
However, Temple Beth Shalom will be feeling the effects financially for quite some time. Our building has been damaged but can be repaired with the funds donated from individual families and congregations. What cannot be repaired so easily is the financial hit that many congregants were met with which makes it impossible for them to pay their dues to the Temple, as they need their money to feed their families.Because we were without power for so long, we now believe it is essential to switch to solar power permanently, so as to never again be subject to the vagaries of the fractured power grid. We need to reduce our energy needs to make it more cost effective to produce our own energy with solar power. We are evaluating our current energy consumption and identifying ways to reduce it, including redesigning our air conditioning system. Our kitchen appliances, especially our freezer and refrigerator, were all donated long ago and need to be replaced with energy efficient appliances. We need a resilient solar power system that can power the entire building that is hurricance-proff, or can at least be easily taken apart and brought inside to protect it from future hurricanes.You can help us meet this goal by making a donation here.
Again, thank you for having TBS and the island in your thoughts,