I am Salatiel Corcos, President of Temple Beth Shalom. I have come today to honor the memory of Norma Topp, who was president of Temple Beth Shalom many years ago. I am grateful to  Diego Mendelbaum, religious leader of Congregacion Shaare Zedeck, the JCC, for inviting me to present Rabbi Patz’s eulogy, written in Norma’s memory. Rabbi Patz extends condolences to the family and to both congregations, indeed to the entire Jewish community of the island and beyond. He expresses his strong sense of privilege for having been Norma and Bill’s rabbi.

This is a sad day for the Topp family and for the Jewish community or Puerto Rico as well. Norma Topp was one of the last of a generation whose long experience on this island began eight decades ago, just three years after World War II ended. Puerto Rico was very different then. So too was the San Juan to which Norma, a 19 years old Toronto girl, came, with her distant relative Bill, now her new husband.

The trolley from Old San Juan came only to the edge of Condado and turned around on Del Parque. Nearly all of Isla Verde was a forest of palm trees. Adult women, in Norma’s telling, wouldn’t leave their homes unless they wore hat, gloves and stockings. What a shock it was for her – weather and culture both. Fortunately, Norma was up to the challenge.

She was a class act in every aspect of her life. Norma Topp exuded quality. “She was the kindest person and the most caring,” in Debbie’s words, “above and beyond and unmatched” all through the years. When Debbie told her brother Robert that their mother had died, he cried bitterly. His tears reflect the grief of Norma’s survivors: Norma’s daughter Debbie and her husband Gary, Norma’s daughter Carol and Norma’s son Robert;  Norma’s grandchildren Sarah and Daniel, Anna and Dov, Alejandro, Enrique, and Annibal; and her great grandchildren Oliver, Sadie, Charlie and the newborn, Harry, just three months old. Robert’s tears reflect the grief we all feel at Norma’s death.

She was 91 years old, well beyond the age that Pirke Avot, the post biblical book called Sayings of the Fathers, Dichos de los Padres, describes as the age of gevurah, strong old age. Throughout all of her 91 years, some of which were not easy, she had been a tower of strength for everyone whose lives she touched.

Among the many wonderful things that happened to Naomi and me in coming to Temple Beth Shalom nearly 14 years ago, was meeting Norma and Bill and becoming friends with them. We immediately saw in Norma what everyone who knew her saw: a woman of grace, warmth, dignity, openness and intelligence. Our admiration and respect for her only deepened over the years. Norma and Bill were founding members of the congregation. Both were presidents of the congregation, and their presence was so vivid that after Bill’s death the second floor of Temple Beth Shalom, where the office, the library and the classrooms are located, was named “the Topp Floor.”

After Norma moved to Naples, Florida, I was able to speak with her by telephone from time to time. I treasured those conversations. Norma was still eager to be part of life. Just recently, she renewed her membership in our congregation, and she proudly cast her vote in the U.S. national election.

Throughout her life, Norma displayed her love of life, for her husband of 66 joyous years, for her children and for her community. She was what is called in Yiddish, a gute neshoma, a good soul, a real personality.

The traditional words of praise for a Jewish woman come from chapter 31 of the biblical Book of Proverbs, Mishlei in Hebrew, El Libro de Proverbios in Spanish. In that chapter are 21 verses of praise, arranged in alphabetical order. The verses start with the assertion “What a rare find is a capable wife” and go on to describe the amazing range of qualities and activities of such a woman. The world of the 1940s was an age when it was usual for most women of her station to be defined by their role as homemakers. But Norma was much more.

Yes, she was Bill’s loving partner for 66 years, and a wise counselor to him as well.

And yes, she was a caring and devoted mother to Carol and Debbie and Robert, and grandmother and great grandmother.

And most definitely, she was very much a person in her own right. She was a strongly motivated teacher of developmentally disabled children. She was an active member of the temple board and the temple’s first woman president. She was a voracious reader, an alert citizen, a caring and loyal friend.

She was also a collector of beautiful teapots – teteras. Norma insisted that Naomi and I choose one during the shivah for Bill. We display it in our home, where we see it every day. It reminds us of this remarkable woman whom we loved.

Norma’s was a lifetime of distinguished service worthy of the highest praise. The verses in Proverbs honoring the ayshet hayyil, the woman of valor, conclude with this commendation: “T’nu la mi-pri yadeha ve-y’hallelu-ha ba-shearim ma-a-seh-ha. Extol her for the results of her efforts, and let her achievements praise her in the gates.” (Proverbs 31:31)

Zekher tzadikkah l’v’rakhah. May her memory be a blessing for us all. 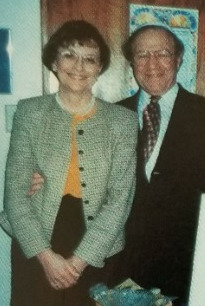